You are at:Home»News - National»Federal weapons prosecutions continue to climb in 2019

Lee’s note: This just in from the Transactional Records Access Clearinghouse (TRAC) at Syracuse University. I’ve used TRAC data in the past. Each month they offer a report focused on one area of criminal litigation in the U.S. district courts. They’re reliable and nonpartisan.

The latest available data from the Justice Department show that during the first seven months of FY 2019 the government reported 6,526 new weapons prosecutions.

This marks the fifth straight year that weapons prosecutions have been rising – up 68.7 percent since FY 2014.

If prosecutions continue at the same pace for the rest of the fiscal year, prosecution numbers should match their previous peak level attained during FY 2004, fifteen years ago.

According to the case-by-case information analyzed by the Transactional Records Access Clearinghouse (TRAC) at Syracuse University, two out of every three prosecutions were for the offense of unlawful shipment, transfer, receipt, or possession of a firearm by a felon.

The Bureau of Alcohol, Tobacco, Firearms, and Explosives (ATF) was the lead investigative agency for 63.5 percent of prosecutions referred. The Federal Bureau of Investigation (FBI) was second with 13.2 percent, followed by referrals from state and local authorities with 8.9 percent.

The comparisons of the number of defendants charged with weapons-related offenses are based on case-by-case information obtained after successful litigation by TRAC under the Freedom of Information Act. 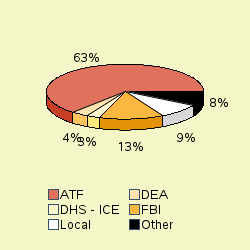